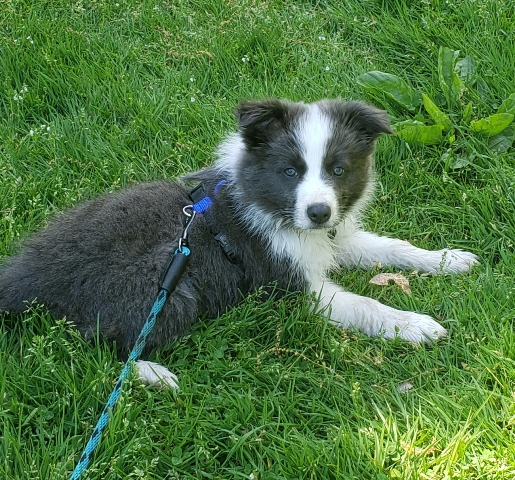 Four weeks ago, Wayne and I got a new puppy!
Enter Batman.

Batman is a blue and white Border Collie.  He is my first Border Collie.  For the last 2 years, "Team Beth" has just been me and my two girls Kala and Grin.  I lost my young boy Ninja in January 2019.  I needed time before I restarted the journey.

So far, Batman has learned a lot around here.  I have had to re-visit all of the pain points that my clients experience, but that I hadn’t experienced in many years.

I chose Batman partly for his great health potential.  My last 3 male dogs haven't lived long enough.  Treasure, my first Black and Tan Doberman lived to be only 6, Shumai, my next Doberman only lived to age 7 and of course, Ninja was only 3 when we lost him.

I was also looking for a stable temperament.  I knew the breeder, Joan, for over 20 years and have seen so many of her dogs, I knew I had a great chance of having both of my puppy objectives met, stable temperament and great health.

Now the rest is up to me!  If I nurture and train Batman correctly, I'll have another great dog that will bless our lives.

Of course, my goal is to do agility with Batman, just like with my other dogs.  I've already started training some foundation behaviors for that sport, but training should be fun, not work and I love training him.

It’s been 5 years since I raised a puppy.  Alot has happened since my last puppy.  For some reason I’m even busier then I was when I acquired Ninja!  But I wanted to write down some of the struggles that I forgot about and what my clients tell me about everyday with their puppies.

Housetraining is basically keeping accidents from happening.  Thats what it’s all about!  Housetraining and cratetraining are the two first real dog training tasks a new owner faces when getting a new dog.

I’ve had Batman for 5 weeks now and he has had a total of 5 accidents.  The ONLY reason for that is some very careful management and also getting to know his constitution and his habits. For example I know Batman needs to go out in the morning after his night in the crate.  I know that he will only need to urinate and then we come in and he eats. He then goes out again, urinates again and then has a bowel movement.  If he doesn’t do that second urination, I know I only have about 10 minutes before I need to bring him out again.  I also know that during the day if he is out of his crate I maybe have 30 minutes before I will bring him out to urinate.  He defecates again mid day and one more time in the evening.

He has already gotten so that I can trust him a lot more, but I still take him out VERY regularly and monitor him all of the time when he is out of his crate.

As I tell my students, if I bring him out and he didn’t go and I think he should have, I will either put him in his crate and bring him out later or I’ll wait a little longer.  Puppies get easily distracted.  I think Batman understands that we do our business outside, but there is no way I can trust that and won’t for some time.  As he gets older, he will be able to hold it longer.  But if you want to be successful as soon as possible when you are houstraining a new puppy or dog, you HAVE to be diligent.  You have to either be watching your puppy or put him or her in his crate.  In my opinion, housetraining is the easiest skill to teach a new puppy.  It all depends on your diligence and careful monitoring.

Batman bites way more then any of my puppies.  There is no doubt in my mind.  I have lots of toys and I play with him and I re-direct if he goes for my hand.  I have taught him that “HEY!” means he is getting me and he better stop.  Right after I give that correction, I throw a toy or something.  With biting it’s important to keep in mind that it is temporary.  You don’t want to get in a lot of arguments over it with the puppy.  That will JUST bring on more biting.

He is turning the corner now at 12 weeks and is biting less.  As he gets his adult teeth between 4 and 6 months that bratty bitey behavior will cease, thank goodness.

I have crate trained difficult dogs and I have crate trained easy dogs that take to it right away.  Batman kind of fall in the middle.  He took to crating pretty easy and I use it a lot.  I’m not retired and I don’t leave my property to go to work but I work a lot!  I will not let a puppy run around free if I cannot keep my eyes on him 100%.   I do this to keep him safe as well as to make sure my housetraining is going well.  It works!  I’ve done it this way for 9 puppies now (since I’ve been a dog trainer) and my puppies are always well trained and well adjusted.  The thing is when Batman is out of his crate he is getting my 100% attention.  We play, we train and sometimes we rest together on the couch.  But I love using the crate.  It’s a very underused tool as far as I am concerned with most puppy owners.

Usually when puppies are Batman’s age they are really good at coming when called.  I always say this in my classes, but Batman is a little different and it helps me to see that there can be a range of good  Batman is very, very confident and can be kind of independent when outdoors.  If he smells rabbit poop or (YUCK) bird poop, I kind of lose him (mentally).  I now take him out on the leash in some areas of my property, some known “bad recall” areas.  But practicing the recall is something I have to do a lot more with Batman then with my other dogs.  I could see though, if someone didn’t know what they were doing with him, he could become difficult in the recall department.   That’s just my educated guess.  It’s not going to happen!  I have to put more effort in with this guy.

I forgot about how many toys a puppy can love!  Batman loves to play tug, which is great for future agility training.  But when he is out of his crate, it’s like a toy bomb blew up in my house.

By far the biggest challenge of having Batman is safe introduction to my adult dogs.  Grin, my now 10 year old aussie, is fine.  But she has given him some pretty good corrections for being fresh, way more then Ninja received.  But Ninja was a very different dog.  My real challenge is my Doberman, Kaikala.  Kala doesn’t take quickly to other dogs.

Her "brother" Ninja was her favorite dog ever!  As a behavior consultant and dog trainer, I know that Kala’s problem is a severe lack of confidence.  I love her so much and she is a great agility partner. In agility she feels safe so she has still managed to get her agility championship.  She is very well trained.  She just lacks confidence when it comes other beings.  So I am taking my time with her.  Kala was here first.  It's a little extra work but it will be worth it to build the relationship that she and Ninja had.

At the time of finishing this little article up, it’s been 4 weeks and just yesterday we had our first successful walk in the woods, all three dogs.  Part of the time, Batman is on leash and part of the time he was loose.  When we got back home and were still outside, Kala decided she wanted to play with him.  I let them play but stopped it while it was going well.  But every day it gets better.

Not everyone has an extreme dog like Kala, but still, it's important to know that if you have another dog in your home, that dog deserves for you to still spend plenty of quality time with that dog.  I also don't like to hear from my clients that the new puppy is beating up on their older dog.  Just as those puppy teeth hurt us, they don't feel good on your adult dog's ears either!  Always give your adult dog regular breaks from the puppy.  Eventually, those puppy teeth will be gone and the puppy will mature as well into a great adolescent and adult dog.

Because of Kala's issues, I have kept a very careful vigilant watch.  Often Kala has been behind baby gates while Batman is here with me in the kitchen.

If you do what I do and give the puppy 100% of your attention when he is out of the crate, then you HAVE to carve out time from other things in order to do that.   Talk about really slowing things down!  I feel a bit behind in my work and definitely in my housework.  But again, that is temporary.  Rather then complain about it, I want to be sure I appreciate Batman at this age.  It goes by so fast!

I believe, over all, it’s going well.   It had better!  Batman is not going anywhere!  I already love the heck out of him.